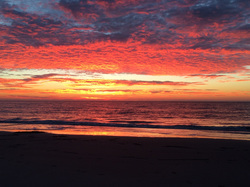 My intention for a post before Thanksgiving was to focus on connections – our connection to our Self – each other – the natural world and the physical world.   I had picked a lovely sunrise photo that I had taken on a beach earlier this month.  My “good feeling” sense of connection to the world came undone last Friday afternoon.  I glanced at my Facebook  page after reconnecting with a long time friend over a late lunch.   There was a post from my niece who is on a temporary assignment in France, it read – “Family and  Friends –Phone is about to die but I’m ok.  Left Paris about two hours before the events unfolded.  Safe and sound in Belgium. My heart is still in Paris though.”

I was filled with dread, “Safe from what?”  I thought.  Decades of life experience flashed through my mind – London in the 70s and fear of IRA car bombings,  European flights being hijacked or falling from the sky and hostages on cruise ships in the 80s and 90s and of course 9/11.  “What now?”  As my community of international friends started to weigh in, I began to understand the enormity of what was happening.   I felt the deep sadness reminiscent of the feeling I had while watching news clip after news clip as the Twin Towers came down over a decade ago.

An Egyptian American friend posted his view of events in Paris and Beirut.  My diversity of friends and acquaintances on Face Book weighed in with different expressions of grief, sadness, anger, calls for peace mediations or a desire for revenge.  The range of human emotions was felt in varying posts.  I felt overwhelmed.

In the early part of my career, my work took me to Middle East and North Africa.   From the  mid 80s to mid 90s, I could sense the rising state of unease in the region.  As after 9/11, I recalled these travels and one specific  (circa 1988) discussion in social setting in Cairo.  It left me with a sense of angst.  The hostess was an Egyptian and teacher at a local college.  Her husband was in the Egyptian Air Force.  They had a stylish apartment in downtown Cairo.   She expressed concern about the increasing “have not” population compared to the “have” population in her country.  It was an intellectual discussion, with no solution offered.  She prognosticated that the continued disparity would cause a revolution, because this population  was “illiterate” and only had Islam as an outlet.   She glanced around her apartment, motioning at the furnishings and said, “we will one day be the enemies of those who don’t have this.”
As the world has become more connected through social media and other electronic outlets, we, too, see the disparity between the “haves” and “have nots.”   As I see the heart wrenching photos of Syrian children fleeing their homes and getting separated from families, I wonder what will be their future?

I truly have no answers, only questions.  I can’t comprehend the disconnection with the World and them Selves that members of ISIL or other terrorist organizations must have.  I don’t think their leaders are illiterate and may not even be have nots.  They do know the depth of despair in the region and know how to provide propaganda to disconnected people.  Ironically some say their success is their ability to connect through social media with the disenfranchised.  How can individuals and world leaders who despise the tactics of these terrorist leaders intervene to provide connection with the disconnected followers who become the soldiers of terror?

Despite our political, cultural and language differences, most Nation States have a shared sense of ideals about the value of human life.  I agree that these Nations States need to unite to remove the proliferation of hatred terrorist leaders espouse.  What about the future generations that are impacted by this upheaval and destruction?  How do we connect them to a life of hope, a sense of the goodness and kindness that many of us enjoy?  Is it as simple as providing them with food,  shelter and education?

For those of us who have the closeness of family and friends in our  homes this Thanksgiving, please take a pause to be grateful for the food, shelter and people connections that make our lives special.   Perhaps take a moment and connect with someone less fortunate.  It may be as simple as donating clothing or food to a local shelter or church.  If you pray or meditate, maybe send some healing thoughts into the world so that world leaders make good decisions in the battle that we face against our ideals and way of life.  If we give up our sense of connection to the world, could we become disconnected?

I sometimes feel my need to go inside or connect with Nature makes me indifferent to the physical world – a bit of an avoider.  However, these connections help me to put faith in humanity to make the right choices and give me the energy to more broadly connect.   So, even though these words are not what I had in mind,  I decided to post the sunrise picture.  It connects me to a favorite quote from a childhood visit to Independence Hall.  As the founding fathers were negotiating the signing of the Declaration of Independence, George Washington sat in an arm chair which had a engraving of half a sun on it.  There were many disconnects among the delegates before all connected in agreement and signed the final document.  Ben Franklin is reported to have said, “I have often looked at that sun behind the President without being able to tell whether it is rising or setting.  But now I know it is a rising sun.”  Happy Thanksgiving and please take time to connect with a loved one!